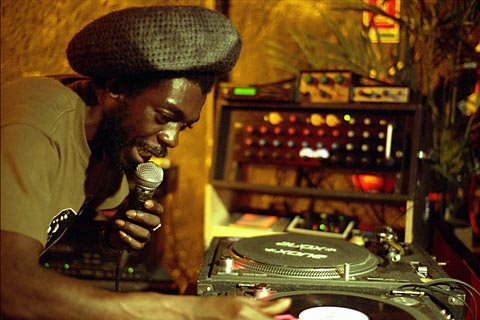 “Aba used to deejay on ‘Jah Tubby’s’ sound system
and at that time he was known as ‘Jasmine Joe’.
Those of you that were around the sound system scene in the eighties will remember the slightly extrovert mic man that ‘Jah Tubby’s’ had; that was Aba.

When Joe embraced the Rastafarian faith he adopted a new and more positive attitude and with his rediscovered faith a new name.
That name was and is ‘Aba Shanti-I’,pronounced ABA SHANTI-EYE not ONE.
So you see the name ‘Aba Shanti-I’ is not just the name of the sound system, it is the name of the person that is playing the sound.

Over the last 10 years Aba has been playing his sound, and the music created by his brother Blood Shanti on that sound, in small and large halls throughout this country and in the process has developed a following covering the widest spectrum of Jah’s humanity. Black/ White/ Asian /Young /The Not So Young /Rastafarians /Bald head /Dread.
All races. All creeds. All genders.
We don’t segregate, we integrate.

They come because an ‘Aba Shanti-I ‘ session is synonymous
with a vibe and a feeling.
No one at an Aba session is made to feel strange.
It is not about what you look like, it’s about who you are and what is in your heart!

People come to discard their worries and to lose themselves in the music and by doing so cast off
the mental shackles from their mind and the yolk from around their shoulders,find themselves, be at peace and be free.

The vibe that Aba generates has brought him to the attention of the media on a worldwide basis and he has been the subject of numerous articles in domestic and foreign magazines.

In the last 3 years we (Aba Shanti-I & Falasha recordings) have been the subject of 3 television programmes.
1 German ‘Deep in Dub’,1 French ‘Aba at Carnival’ and 1 domestic ‘Urban Rites’ Big Issue Film Unit Series.

This has resulted in ‘The Aba Shanti-I’ sound system and ‘The Shanti-ites’ live band being invited to tour Europe on a number of occasions to bring the vibe to a larger audience.
Everywhere we have played we have been greeted by enthusiastic patrons who have been so happy to be ‘experiencing the fullness’ of ‘Aba Shanti-I’ and ‘The Shanti-Ites’ live and direct and in their own backyard.”