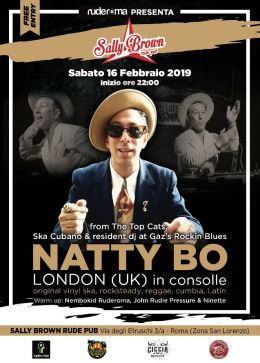 Wearing a blue zoot suit with wide lapels and an open-necked shirt, Natty Bo looks as if he has just walked off the screen of a cinema showing Our Man in Havana, or another film set in pre-Castro Cuba, in which he plays the fixer, the man with an answer to every problem, whether you need a fake passport or a doctor who’ll treat your gunshot wound without asking how it happened.

In his version of real life, Natty Bo is a DJ, singer, and leader of at least two bands, Ska Cubano Natty Boand The Top Cats. Both bands play music with a ska beat, one featuring songs in Spanish and flavoured by Cuban and Colombian rhythms, the other in English and twinned with American R&B…